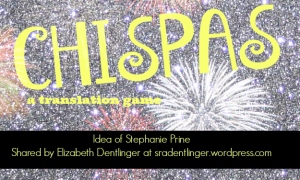 Chispas (or Sparkle, in English) is another great game that I stole from Stephanie Prine’s #iwla14 presentation that works well for both TPRS/CI and textbook-based classrooms.  Students get SO excited to play this game in all of my levels.  Spanish 1 just played for the first time yesterday to prove they understood the difference between son las and a las with a Martina Bex story, and they came in asking to play it AGAIN today.  I’ve never had another  translation activity so well received.

Here’s how to play:

I like this game for a lot of reasons.  First of all, my students liked it, too, and that makes a world of difference.  However, there are more important reasons.  It reminds me of when I do Embedded Reading when my students have to translate Spanish to English.  I like that this activity has students look at literal English translations because it helps students recognize what the word order is in the target language and it really helped those students who think in English first (no matter what I tell them!).  It allowed me to review a story we had worked on all week in a new manner (the brain craves novelty, after all!) to let me see what students had actually acquired throughout the week.  Lastly, I kind of like that it was translation (some might call this a comprehension check, but I’m not going to argue over terminology here) because in my experience students are so proud when they get done doing it.  They can’t believe that they actually knew all of that information.

I used this after learning various CI stories this week, but you could definitely make this activity work with textbook-based units, too.  The example Stephanie Prine has on her website is for a textbook unit.

Make sure to give CHISPAS a try with your current unit!

6 thoughts on “Chispas: a translation game”