I recently attended the Central States Conference on the Teaching of Foreign Languages and man did I learn a lot!  I have to admit I was a little star struck to see people I stalk on Twitter, the faces that belonged to the people writing the novels I use in my class, and the man behind the Youtube chistes that I show in my class each week.

One of the sessions I attended was COMUNICA CON CANCIONES… Canta con Ennio Emmanuel by Terri Marlow of Parkersburg, West Virginia.  At first I just thought it was another “how to use songs to entice students” session.  I felt uncomfortable as everyone else in the room seemed to already know the song and musician.  Terri played a song by Ennio Emmanuel for us, had us sing along and act it out, and showed us some worksheet style activities that she did with her classes using the song.

You might be reading and asking yourself, “Why is she bothering blogging about song worksheets?”

The answer: this session was only hinting at the true content: Ennio Emmanuel appears to be a real artist who gives SPANISH concerts in schools. HOW COOL IS THAT!?

I have never heard of this before and I think it’s the neatest thing so I absolutely had to share with everyone.  What I’ve learned is that the Justo Lamas Group promotes Ennio Emmanuel. From what I understand the group started with a previous artist named Justo Lamas from Argentina and Ennio Emmanuel is their new artist from Puerto Rico.  If you’re interested in viewing one of his concerts for 2014-2015 you have two options: go to one at a neighboring school or actually host him yourself!  Allegedly, Ennio has students dance with him and will even do autographs after the concert.  I think this is the most genius thing and I am drinking the kool-aid for the following reasons:

– The Justo Lamas Group has prepared activities to help Spanish levels 1-3 learn lyrics to his songs.

– The Justo Lamas Group has prepared TPRS-friendly activities to ensure your students truly understand the content in the songs.

– There are karaoke versions for the kids to practice with before the concert!

– The two artists are Twitter friendly so kids could follow them (@justolamas and @ennioemmanuel) and maybe interact with them before the concert.

– It appears that Ennio Emmanuel is on Instagram, which could add a whole new fun element to class! 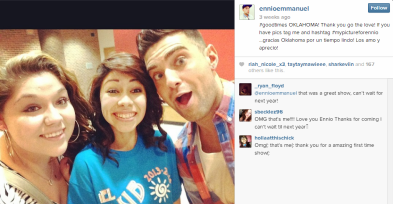 I hope you Spanish teachers out there will look into this opportunity for your students (and I wasn’t paid to tell you about this – I swear!). It would serve as a selling point for your program.  It would also show your students that what they’re using in class is REAL and that the Spanish language and culture is alive and that they’re fortunate to take a part of it.